Last summer I started a pretty big project, at least for me: The Dew Drops Shawl in Darn Good Yarn’s Lace Weight Silk/Silk Cloud. I almost never work projects in lace weight, or lace in general. Little bits of lace in sweaters or mitts, yes. Easy 2-4 line repeats of lace, yes. Like the lace edging on the Burlesque Shawl I’ve been working on (on a side note, last night my friend D. was asking me why I had taken so long in the car, to which I replied my lace count had been off and I wanted to fix it before I came inside. “Lace!?!” he exclaimed, “You can knit LACE?!?! Like LINGERIE LACE?!?!” which then led into a conversation about the making of lace and how it was made. I’ve never seen D. so interested in my knitting before. hehehe). Every line is the same, just positioned in a little zig zag over each other.

But big, hundreds of stitches, itty bitty little bits of lace, no. I find lace knitting beautiful and skillful, but tedious and annoying.

I love it, and desperately wish someone would knit me a beautiful lace shawl – I just don’t want to knit it myself.

So when I picked the shawl back up after months, and was able to complete almost a full chart with no errors, I was pretty damn proud of myself.

And now I’m almost to the last chart and I’m even more proud. I had originally thought of gifting this shawl when it was done (I’m not a huge fan of the play of the colours) except I wouldn’t be surprised if by the time it’s done, I won’t want to be separated from it.

I do know, however, that if I do end up gifting it, whoever receives it will be given a full list of instructions how to care for it and what will happen if I find out it isn’t being treated properly.

Over the last couple days I’ve been dreaming of designs, but more specifically of cables. I think it was spurred on by KnitPicks new collection, Celtic Knits, which features a beautiful cardigan, Dealla, that I adore – except for the medallion on the back.

Do I really want to try to knit the pattern without the medallion? Maybe not. And so since then a pattern similar to Dealla, but of my own creation has been playing in my head. Swirling cables with loops and chains and of Celty goodness. How hard could it be to design your own cable, I ask myself as I daydream at a boring Teacher’s Convention.

Today I actuall sat down to try and start designing this cable running through my brain (after, I might add, about 4 hours of having to rework sleeve caps on my I Heart Aran Pullover since the sleeves and body didn’t want to seam into anything except horns) and after doing some sketching I started to wonder, “ok, I have the general idea. But what comes first: the chart or the swatch?”

I’ll admit: I rarely design my own patterns. Something simple I can wing, sure. At the already mentioned boring Teacher’s Convention, I ended up whipping out a pair of fingerless mitts to match the hat I had finished on my commute there sans pattern. But a cable? Nope.

“How hard could it be to chart a cable?” I thought naively.

Wrong. Now as I sit with my sketch and idea, I’m starting to think it’s better to swatch first and chart later.

So now I’m asking to my fellow knitters: what comes first the chart or the swatch?

A Game of The Chicken or the Egg

I’m beginning to realize that I may be addicted to knitting sweaters.

They are the main thing in my queue, the one article I always seem to be casting on, and calculating if I have enough hobby money saved up to buy enough yarn to make a new sweater.

And even though I already have 3 sweaters on the go (1 for husband, my I Heart Aran sweater, and one I cast on last night with stashed Spud and Chloe Sweater) I keep thinking about what new yarn I could buy and cast on ANOTHER sweater, or how I could frog that old red sweater I never wear and have enough to start knitting a sweater for my mum.

The cycle never ends, and I’m beginning to become slightly ashamed of my sweater obsession.

So as I mentioned in my last blog post, I/we went on vacation. It was fantastic. Want to see?

We traveled all over southern Florida – from Orlando to Key West – and got to spend a couple days in the Bahamas. It was pretty awesome. Because of our itinerary that meant we had a lot of car time, which of course meant knitting time! I’m pretty happy with myself since I managed to finish The Hubby Hat  that I mentioned in my last post (!!!) and Husband loves it; he’s already tested it out today while cross country skiing. 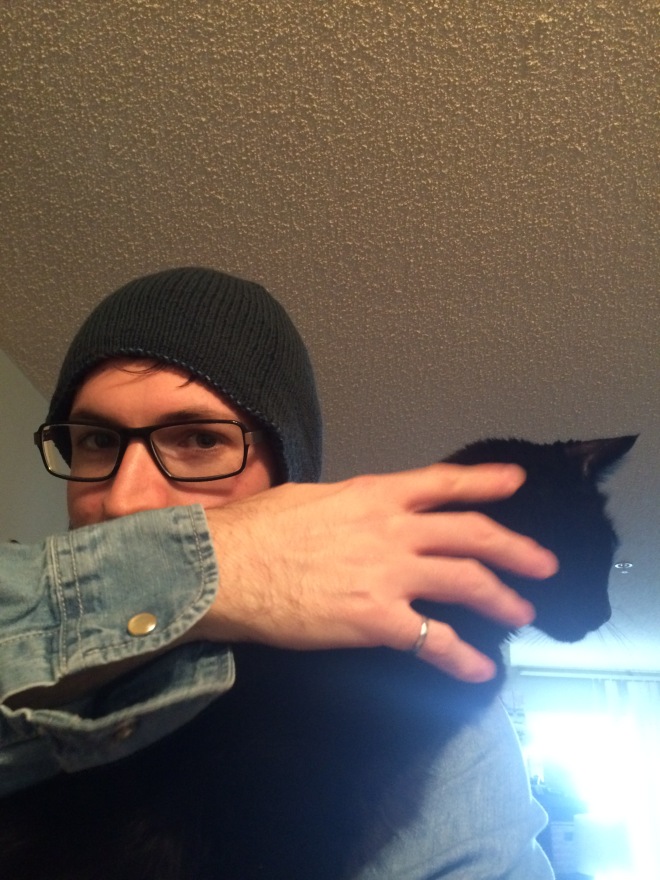 And I managed to work on my Socks for the Deputy Headmistress. I sadly had to rip back the cuff and leg I had started though. The called for 72 stitches seemed way too big for my leg (and I have decent sized calves) and I had been skeptical from the get-go as I don’t think I’ve ever cast on socks with anything more than 65 stitches. So I ripped back and cast on again with 60 stitches instead, and this seems a LOT better.

Sadly I didn’t get to work on them while I was at Harry Potter World, because everyone mocked me when we were getting ready to go. And honestly, I wouldn’t have had time anyways! We seemed to hit Universal at a fantastic time and never had to wait more than maybe 10 minutes for any ride. It was ridiculous and wonderful.

Now that we’ve been home for a week though, and I’m finally feeling back up to snuff (our flight[s] back made it so we only got maybe 3 hours of sleep over 24 hours and when I’m lacking on sleep, I become a very, very grumpy and sick bumpkin), I’ve managed to finish and wear my Pierrot vest (I love it). 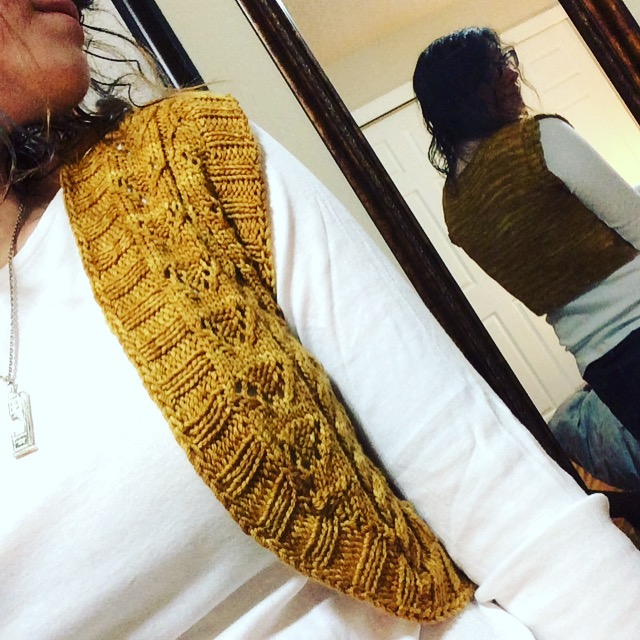 I’ve also finished the front of my I Heart Aran sweater and am now on the first sleeve (gooooood, sleeeeeeeeeves), discovered that I’ve been knitting two right fronts for Kyle’s cardigan (go me), and finally decided on a blanket pattern for an upcoming wedding present. But more on all that later.

Back to the Grind